What is the purpose of Measure R and its 3.5-mile buffer zone? 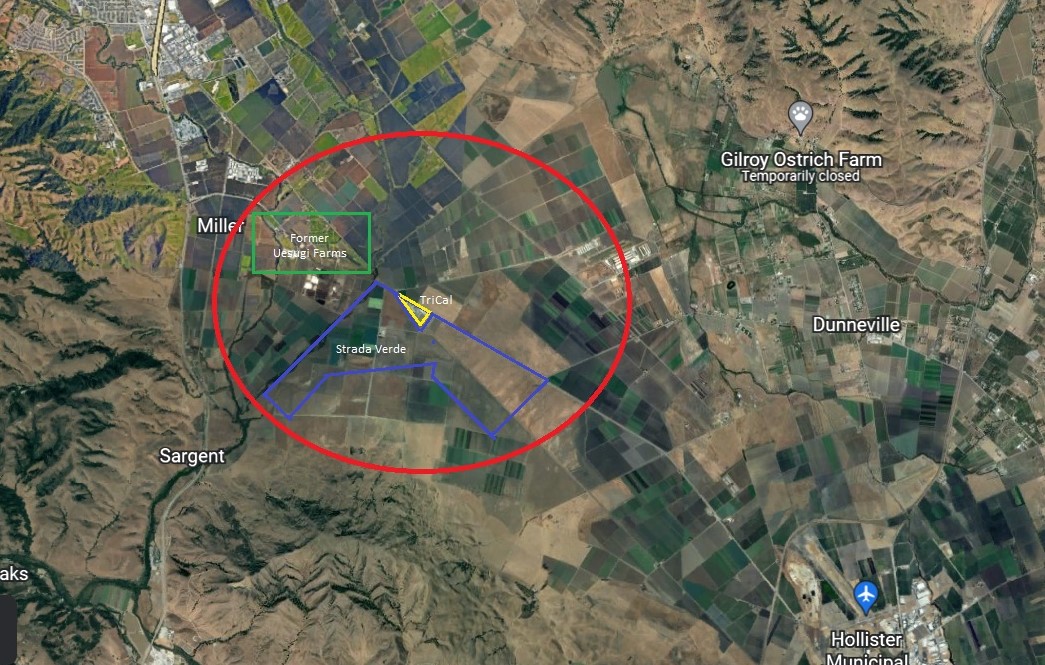 END_OF_DOCUMENT_TOKEN_TO_BE_REPLACED

Voters are confused by Measure R pro/con mailers and are left questioning its purpose and impact.

Brochures mailed out by the Yes on Measure R campaign state that a buffer zone is needed for the safety of children, families and workers. But Measure R opponents claim the initiative’s goal is to stop the proposed Strada Verde Innovation Park, which is adjacent to the TriCal agricultural chemical facility along Hwy 25. What is the potential impact of the buffer zone for San Benito and Santa Clara counties?

According to the San Benito County Elections website, Measure R would amend Section 9 of the Health and Safety Element of the 2035 General Plan. If it passes, it would establish a 3.5-mile safety buffer zone around certain industrial and commercial facilities that handle chemicals. The buffer zone would not extend north into Santa Clara County.

The ballot title for Measure R is “Public Health & Safety Buffer Initiative.” While campaign material about the measure is clearly aimed at TriCal, the measure states that “a health and safety buffer shall be maintained between new sensitive uses of land (such as retail, office, hospitality, manufacturing, and other commercial or industrial uses, residential subdivisions, schools, day care centers, hospitals and parks) and industrial or commercial facilities that conduct, or are authorized to conduct, bulk-scale (i.e. in excess of 10,000 pounds at a given time) receiving, handling, blending or distribution of industrial or agricultural chemicals regulated as potentially hazardous by state or federal law.”

Measure R goes before voters on Nov. 8 and many residents say they are confused by the messaging. The purpose of the initiative, according to its backers, is to protect families from TriCal, which is monitored by the EPA and has operated in its location for 43 years.

To add to the voter confusion, why did Valerie and James Campbell, of Dallas, Texas-based Byrd Campbell, a real estate group, donate $50,000 to the Committee for Equitable Growth, the sponsors of Measure R? Neither responded to BenitoLink’s request for comment.

If approved, Measure R would create a partial 3.5-mile buffer zone only in San Benito County, around the TriCal facility. But the buffer zone would not control development in Santa Clara County along the Hwy 101 corridor, since Measure R applies only to San Benito County. This means Santa Clara County land within 3.5 miles of TriCal could benefit from improved access to Hwy 101 and Hwy 25 with new commercial or residential development.

Measure R’s intended buffer zone around TriCal stops at the Pajaro River on the county line. It does not address safety for workers in Santa Clara County.

Over the two years since TriCal has been under discussion, there has been no evidence of effort made to increase safety for the thousand or so residents and workers on nearby farms or for the tens of thousands of people traveling along Hwy 25.  Measure R does not seek to change current operations within the proposed buffer zone.

BenitoLink requested comments from the Council of San Benito County Governments (COG) Board of Directors on how Measure R may or may not affect Hwy 25. COG works with local government agencies to provide information for better planning and help minimize traffic impacts on the community.

Hollister Mayor Ignacio Velazquez, who is acting chair of COG, told BenitoLink, “We do not advocate for or against measures and we will not be taking a position on Measure R or Measure Q. Our mission has been to reduce traffic in our community. We are currently working on the widening of both Hwy 156 & 25, which will increase capacity on both highways and reduce commute times for our residents.” Velazquez, however, while running for mayor has personally campaigned in print and on social media for both Measures R and Q.

There are large, established businesses already operating within 3.5 miles of TriCal but they are not in San Benito County. For example, Christopher Ranch, with 1,000 employees, and Z-Best, which has between 100 to 150 employees, are both to the north in Santa Clara County. Across the river, in Santa Clara County but still on Hwy 25, is the 69-acre Uesugi Farms property, once known for its fresh strawberries. Uesugi Farms was bought in 2020 by KT Urban, a major Bay Area commercial office developer for $7.5 million. At the time, San Jose Mercury News described KT Urban from Cupertino as “veteran developers.”

In 2020, the Mercury News wrote: “Acting through an affiliate, Cupertino-based development firm KT Urban has bought the site at 1020 State Route 25, just down the road from Bloomfield Avenue and Christopher Ranch, Santa Clara County property documents show. The transaction was arranged through the San Jose office of Colliers International, a commercial real estate firm, and Hollister-based Nino Real Estate, a residential brokerage.”

As Santa Clara and San Benito County discussions move forward on the Hwy 25-101 interchange, likely improving and increasing traffic flow in the area, Santa Clara County would be free to build its own commercial node next door, while San Benito, if Measure R passed, would not.

As a response to alleviate hazard concerns, Strada Verde representatives say an agreement between TriCal and Strada Verde, a proposed 2,770-acre commercial project that has been described as a research and development center for autonomous and electric vehicles but would also have distribution centers along its most southern boundary, is already in place, reducing dangers caused by agricultural chemicals on the site. Strada Verde has offered to move substantial parts of the TriCal facility out of the county, which would make Measure R inconsequential.