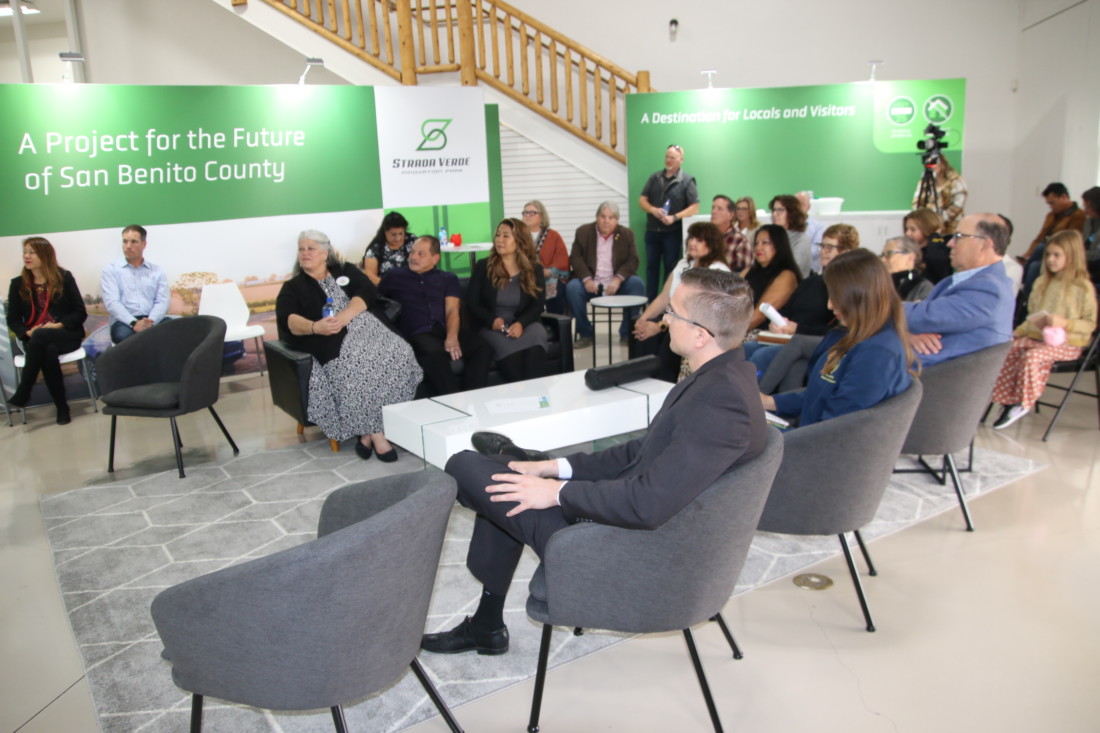 END_OF_DOCUMENT_TOKEN_TO_BE_REPLACED

During an Oct. 15 visit to the Strada Verde Information Center at 354 Fourth Street, California State Treasure Fiona Ma told BenitoLink the Strada Verde Innovation Park project is “exactly what we want” and that she is sure Gov. Gavin Newsom would endorse it.

“We want to keep tech here and bring more clean electric vehicles here,” she said. “This project fits into the governor’s vision and mission.”

Ma spoke to a group of about 40 residents, city and county officials. She said part of the governor’s plan is to totally phase in EV-powered vehicles in the state by 2035 and a program is underway to install electric charging stations throughout the state that is offering $12 million in rebates.

“That has sparked interest worldwide about California, so many companies are coming in asking what incentives do we have,” she said. “Dan [Floriani] said, ‘We want to have an autonomous vehicle testing track here, close to Silicon Valley to make sure we don’t lose the technology and the people who are doing it every day to Arizona, Idaho, Iowa, or even the East Coast.’ This makes total sense. This is what we need to be doing in California.”

Newsom did not respond to BenitoLink’s request for a comment.

Floriani, whose family has owned for over 40 years the 2,770-acre site where Strada Verde is planned to be located, said the family always wanted to do something different with the property. He said Strada Verde has evolved into an “interesting part of the world we’re watching unfold before our eyes in the automotive testing, research and development world.”

Floriani said the project represents a “huge chance to change how we deal with traffic, how we deal with environmental emissions.” He said the site will also preserve agriculture, promote educational opportunities in the county and bring a series of jobs.

Strada Verde is described as a research and development project for autonomous and electric vehicles with 27% of construction going toward e-commerce and distribution warehouses.

“A project like this is unique,” Floriani said. “There will be 600 acres of agriculture, a 200-acre cultural preserve, a 200-acre park that we want to open up to the entire community. We border three miles of the Pajaro River, and I bet 99% of the residents in this county have never seen it. We’ve worked for 10 years with farmers onsite to convert our lands to organic farming while simultaneously cleaning up the Pajaro River.”

He said the project is not being proposed to maximize profits and asked those present to examine it closely. If profits were the main incentive, he asked, why would the backers propose to renovate Veterans Park. He said the project has been driven by three tenets: agriculture, education, and technology.

He said Strada Verde will provide jobs across the economic spectrum.

“If you have a high school diploma, there are jobs on this property,” he said. “If you have a technical degree, a college degree, a master of engineering, you have a job on the property.  You can pull into any gas station, and they can help you repair your combustion car. If you have an electric car, pull into a gas station and ask them to help you. They can’t do it because that workforce doesn’t exist. We need to help it exist.”

The project has not been without controversy. Strada Verde, first proposed as an initiative, was rejected by voters in 2020 through Measure N.

There is now an effort to stop the project through Measure R, with the most prominent local voice of opposition being Hollister Mayor Ignacio Velazquez, who continues to claim without proof that Strada Verde is nothing more than a ploy to build thousands of homes.

Floriani told BenitoLink he would like to debate Velazquez to prove he has been consistently lying to the public on social media and during city council meetings.