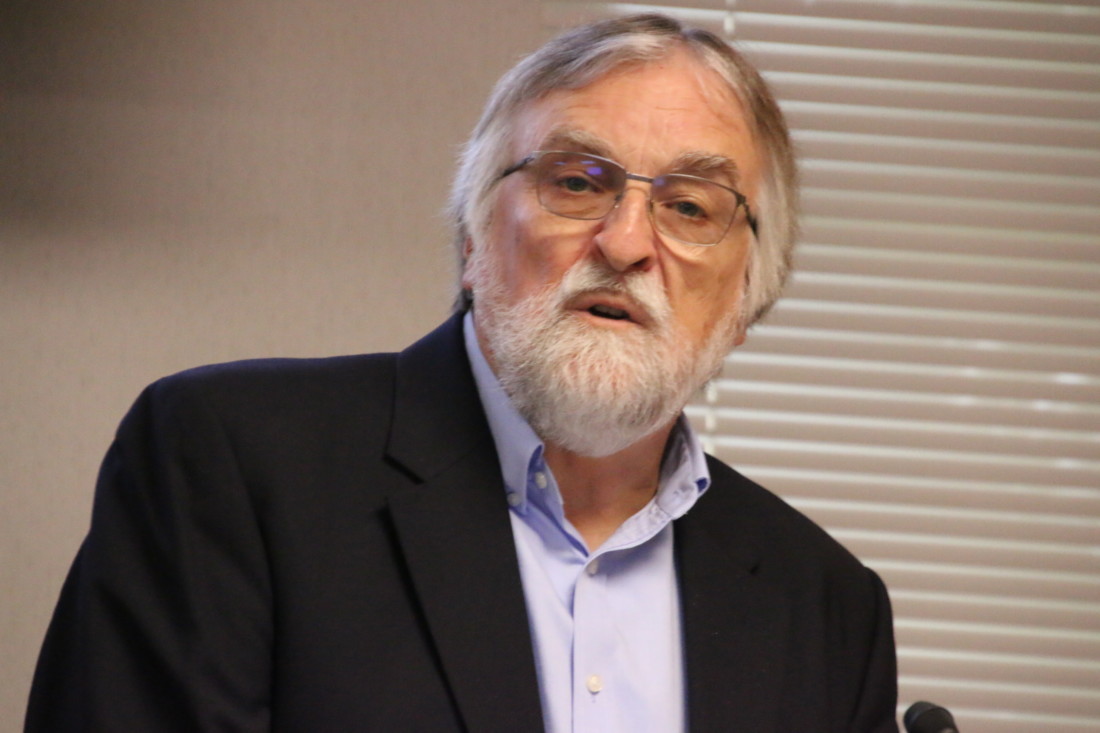 END_OF_DOCUMENT_TOKEN_TO_BE_REPLACED

The first of two public meetings to explain what the Strada Verde Innovation Park is and what environmental impact studies will be done before it can move to the planning stage was held in the San Benito County Supervisors’ chambers on April 27. A second meeting is scheduled for April 28 at 6 p.m.

Abraham Prado, assistant director of planning and building, spoke in English and Spanish to the few people attending in person and those teleconferencing via CMAP about how important the meetings were. He said they give the public an opportunity to express their opinions about the project.

He emphasized the importance of hearing from anyone who wished to speak and asked that they respect one another’s opinions.

Assistant County Counsel Joel Ellinwood, explained why the county is proceeding with the environmental impact study process even though Measure N, a November 2020 ballot initiative supporting the project which sought to amend the General Plan, was defeated.

“Why are we going through this process if the voters have already spoken?” he asked. “California law has two separate processes for dealing with land use maps. It allows initiative measures to amend General Plans. That is separate from the normal planning process under planning and zoning law of the state.”

He also said neither process controls the other.

“All of which must be reviewed in accordance with the California Environmental Quality Act (CEQA), and that’s the process we’re beginning today,” he said. “There will be public hearings before the Planning Commission that makes the recommendations before the Board of Supervisors.”

Stan Ketchum, a contracted principal planner for the county, explained the portion of the project that will be located at the northwest corner of San Benito County. The Pajaro River marks the northern boundary, and the property is between Hwy 101, where access will be at Betabel Road, and Hwy 25. It’s about seven miles from Gilroy and nine miles northwest of Hollister.

“The primary uses now are agriculture and open-space uses,” he said. “The project proposes a new automotive research and development campus on the site, which is 2,767 acres. At maximum build-out for the entire project is as much as 7.22 million square feet of automobile testing grounds, a research park, and e-commerce uses like distribution centers could be allowed.”

He said there are a number of project approvals that the county requires, including a General Plan amendment, specific plan approval, a zone change, a “vesting tentative map” to allow subdivision of the property, and a development agreement where the county and the applicants would agree on multiple points about how the project would proceed.

Ketchum said the project will be reviewed by numerous federal, state and regional agencies with specific areas of expertise, such as wildlife, air and water resources.

John Schwarz, with JHS Consulting, said CEQA requires the county to prepare an environmental analysis to determine the environmental implications from the project before its approval. He said the county, as the lead agency, will conduct the study and the applicant will pay for it, adding that the environmental impact report (EIR) is the most involved public process under CEQA to provide information to decision-makers and the public, and to come up with ways to reduce impacts or consider alternative designs. He said an EIR is a neutral informational and disclosure document.

“It does not take any position for or against the project,” he said. “The first step is the scoping process that alerts the public and agencies that the county will be preparing an EIR. It solicits inputs regarding the scope and content of that analysis.”

He said the EIR begins with a Notice of Preparation (NOP) and the public will have 30 days to submit comments to the county. All the while, the county will be reaching out to various state and federal agencies for their input. He said the scoping meetings are to hear concerns and suggestions, but no answers will be available at this time.

Erin Harwayne, of Denise Duffy & Associates, spoke on the EIR process, its contents, and opportunities for public input. She said the scoping phase will lead to the preparation of the first draft of the EIR that will be published and circulated for public review for 45 days.

“We’ll review and compile all the comments from the public and the agencies,” she said. “The final EIR will be circulated to the commenters [those who made comments] 10 days prior to a public hearing. Then the final EIR will go to the decision-makers to make a decision on the project and CEQA findings.”

Harwayne said CEQA findings can be large and intimidating and that it’s her job to take the technical studies and “put it in a digestible document so the public and decision-makers can obtain information for the process.”

“What’s really important at this stage is the responses to the Notice of Preparation, what the focus should be, what we should be analyzing in the EIR, and what your concerns are,” she said. “Due to the size and complexity of this project we anticipate addressing all of the environmental resources and topics that CEQA recommends. These include everything from the aesthetics of the project to impacts on biological resources, traffic and hazardous materials.”

During public comment, which the speakers were not supposed to answer, no one in chambers spoke, but two people called in to offer remarks. Maria Lamberson wondered if the environmental assessment would include information on impacts to groundwater. She also asked where chemicals would be stored and who would benefit from the jobs. She questioned how the process could continue after the voters defeated the measure.

Celeste Bocanegra said her main concern was that Hollister Mayor Ignacio Velazquez was going on Facebook “misinforming the community that this project is going to have homes built in that location, or a new city, as he states in his videos.”

Ketchum felt her question needed to be answered.

“There is no housing of any form proposed as part of this project,” he said. “These are all nonresidential uses. That’s why we need a General Plan amendment because the current General Plan could allow housing.”